When I first heard about this book, I thought, wow that is clever. It is apparently written by a parent for parents. It was apparently was intended for a later release, but a leaked PDF gotout on the internet, and it became insanely popular, sovthey decided to release it earlier (so i have read online). I immediately wanted to buy the book, but couldn’t really justify the purchase. I ended up buying it for a friend, who by the way will altogether baby girl to the world tomorrow 12/15/11.

When Vivibear came along, she slept fairly well through the night as well, so it didnt really apply. Well hqve things changed a bit over the past week. Not sure what is going on, maybe she is made I was posting pictures of her poo online, but she is now waking up mult times throughout the knight, and wont fall asleep without a fight. Maybe this is a normal phase in growing up, but at 5am, when i got to get up in 2 hrs I really want to ask Why the F*K wont you go to sleep.

I have to admit, the brunt of the night time sleepless baby care is performed by “the boss.” Many a morning/night I continue sleeping as the wails of the babe go answered by the matriarch. I really cant complain much considering we are lucky to have Nai Nai (Grandma) here during the weekday to watchover this cute yet unruly chic. EItherway, lack of sleep still sucks. I dont think I have been sleep deprived like this since being on call intern year. Instead of catering the requests of a 37 year old asking for pain medicine, or something to help them sleep in the middle of the night, I have to answer to the demands of a 7 month 3 week old who will not sleep. She’s pretty darn cute though so you have to forgive her.

I just wonder what things will be like in the next few years. She will start talking (back), and walking (running away), as if to “cry havoc and let slip the dogs of war.” [i think that works right?]

I can already foresee myself facing off with this face in many future confrontations.

All I have to say is bring it! , okay you can have it…

p.s. Vivienne, just keep in mind I do have pictures of your poo, as well as you dressed up in a penguin outfit, and I will show them to any future boyfriends to be.

As far as a review of the book:

Short read. Unlikely will you find yourself reading this aloud to your child, unless you want to curse are your baby aloud. You get the gist of the whole book in the first page, but it does hold o, so true throughout the sleepless nights.

Conclusion: worth buying as a gift. 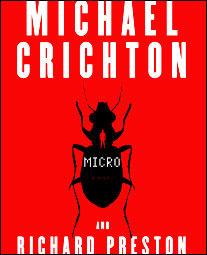 I happened to be perusing facebook, and to the corner of my eye I catch in big white letters “Michael Chrichton.” What is this? I ask myself. It appears there is another book by my favorite author of all time, Michael Chrichton (rest his soul). He unfortunately passed away from throat cancer in in 2008.

I was always inspired by the fact he went to medical school at Harvard, and went on to write novels. I would say one of my favorite books has to be Jurassic Park (I read the book before there was ever a hint of a movie), Congo, and Sphere. While I was in China a few years ago, I noticed a book on the shelves of the Beijing Airport shop by Michael Crichton, Pirate Latitudes. Mind you this was after he had passed, and I have read all his books, so I was skeptical, yet intrigued. Being in China who knows what you are buying. The cover said something about “never released” blah blah blah. I felt the book was a fun read, and the last book by Crichton i would get to enjoy.

Now I see this. Apparently this book was partially finished. Crichton had 1/3 of the manuscript done, with notes/research outlines etc. More info can be found here on the Crichton website. I do not know how I feel about some co-author finishing his book. I think I would feel that the story would not be authentic. Then again I have not read it yet, and it may be great. Now when will I have time to purchase and read it? To get an electronic version, or to buy a paperback to add to my collection. I think I can wait.

Are there any other Crichton fans out there? Many times I feel like I am alone on this one. I cant get “the boss” to read any of his books.

Anyone read this one yet?

Speaking of Jurassic Park, I never had a chance to watch the movie in theaters. I remember when it came out it was the first movie that I remember that had lines wrapping around the theater just to get in. Now I had an opportunity to watch it, and was going with my little cousin to watch it. He insisted that we watch Last Action Hero. Reflecting back, the movie is not the worst (that would have to be The Thin Red Line). At the time I was not very happy since I got to miss out on the hoopla. I remember arguing with my cousing about which movie to watch, but he insisted on Schwarzenegger. I finally go to see the movie when it came out on VHS though (yes VHS).  Fun fact.