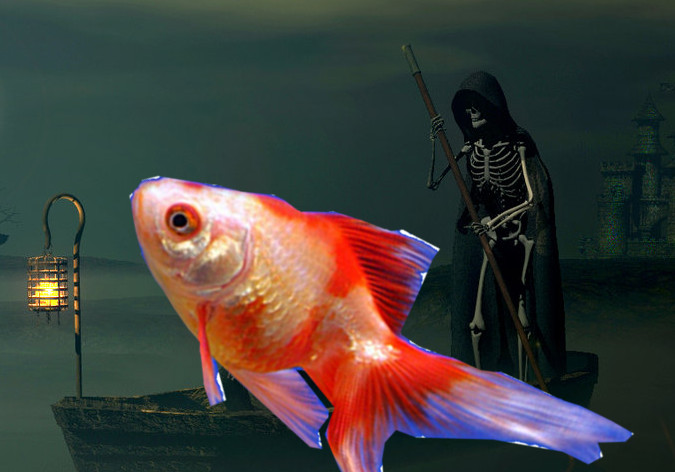 In my dreams of having an indoor pond, I started out with goldfish in a large bowl. Not just a fish bowl, but one of this water garden bowls. I started out with two that got rather large in a course of a year, but they met their untimely death by an ill fated water change. You really should not change more than 25% of the water at a time. It was either that, or the fact that was spraying Seven (insecticide) outside prior to doing a water change. After giving up on the indoor pond, I tried yet again with the mini-pond/gold fish. My replacement fish, Pebble and Pierre lived and thrived.

At this time I did have an outdoor Koi pond as well, but with the colder weather, I needed to over winter them indoors, so I built that large indoor pond in the basement. I figured it was time to consolidate ponds, so I plunked the fancy Ryukin gold fish (Pebble and Pierre) into the large koi pond. Little did I know that this was not advised. Prior to starting my new career, I had a bit more time on my hand and tended to the fish more often (fed them). Actually I think it was because my mother was here that the fish were fed more often. I started to notice Pierre was floating weird (still alive). His posterior would be constantly floating up. I figured his air bladder had to be damaged some how (no signs of trauma though). This went on a few weeks, then one day I noticed he had most of his fins bitten off: tail, dorsal, lateral what have you. Not sure what to do, euthanize or try to heal/save (hanks to ChunJaegirl for the link to Kevorkian-ing fish). I went on Dr. Google and found that #1. do not put koi with fancy gold fish. #2. feed the fish.

I think one problem was my first koi (Fat Boy) may be getting a bit large for the pond. Supposedly they get more aggressive if they are much larger than the others. I decided to try to save the poor fish, as I could not bare ending his existence (I assume my fish are males). I separated him and used my pond salt tonic to try to help heal him. He seemed to do well the first 3 days, but he did not seem like he was eating. I did notice the pond water overall was evaporating/getting low, so I started to add more (of course airing it out overnight). Unfortunately I may have added too much at a time to the isolation tank, as Pierre (instead of floating) was non-mobile at the bottom… he had passed.

Now Pierre (named because he looked like he had a mustache, so of course I correlate that with a french name) was laid to rest in the flower bed near the outdoor pond. He will probably be dug up next time MommyMD gardens, or if the coyotes or even combo decide to dig him up.

Background image was adapted from the creation found on this site: